There are a various number of end of season awards, including certificates, medals and trophies, that we offer to athletes at Helensvale Little Athletics. Every registered athlete is eligible to try for any of the awards. If you have any questions, please don’t hesitate to ask.

Age Champions
This award is decided by the amount of points each athlete has accumulated throughout the season at the club.  The 20/21 season has introduced a new points system – 20 points are rewarded for 1st place in each event, 10 points for 2nd, 5 points for 3rd, 3 points for 4th, 2 points for 5th place and 1 point for event participation.

Champion Boy/Girl
Our Champion boy and champion girl awards are presented to the athletes that achieve the best overall performances. This can be from States, Regionals and Centre levels. In the instance of a draw, the award goes to points based on achievements – 15 points per gold medal, 10 points per silver medal and 5 points per bronze medal.

McDonald’s Achievement Award – Individual Age Groups
These awards are presented to the male and female athletes based on the amount of times the McDonald’s Blue achievement levels are reached or gone over throughout the season in each age group.

Rookie of the Year
This award is given to an athlete who has attained the highest level of achievement in their first season at the club. This can be from States, Regionals and Centre levels. In the instance of a draw, the award goes to points based on achievements – 15 points per gold medal, 10 points per silver medal and 5 points per bronze medal.

Sportsmanship Award
Awarded to a boy and girl from each age group. An athlete who has always tried their best at Friday night club competitions, gives everything a go and is seen to display great sportsmanship, chosen by filling out a nomination form each week and a tally kept for the end of season.

Centre Manager Award
The Centre Manager Award is presented to the athlete who the centre manager believes has gone above and beyond throughout the season, doing their best on and off the track & field and helps others. This athlete displays good sportsmanship, is a good role model, assists with set-up and pack down of equipment and partakes in all events each competition night. Chosen by the Centre Manager.

Throws, Jumps, Sprints Award
These athletes have continuously achieved outstanding results in either their throws, jumps or track events.  The winners are calculated by adding the amount of times during Friday night competition that they have reached the Blue McDonald’s achievement level in each discipline. Junior criteria is U6-U10, senior is U11-U17.

Club Athlete of the Year
The Club athlete is presented to the athlete that the committee believes has gone above and beyond throughout the season, doing their best on and off the track & field and helping others, often without being asked to. Only used as a backup award if needed, and not presented every season.

Personal Best (PB) Awards – Individual Age Groups
These awards are presented to the boy and girl in each age group that has attained the highest number of PB’s at HLA club nights only.

Clubman Award
This award is presented to an adult volunteer who the committee believes has gone above and beyond in their position within the club, doing their best and achieving outstanding results for the club. Nominations received and voted by committee.

100% Attendance
Athletes who have attended all Friday night competition are awarded with the 100% attendance award.

Carnival Award – Junior and Senior
The Carnival Awards are for both the junior and senior athletes that tallied the most points throughout the season at all club level carnivals, excluding regionals and states. Athletes are awarded 6 points for 1st place, 5 points for 2nd, 4 points for 3rd, 3 points for 4th, 2 points for 5th and 1 point for event participation. Junior is U6-U10 and senior is U11-U17.

Participation
Presented to all other athletes who nominate to come to presentation. 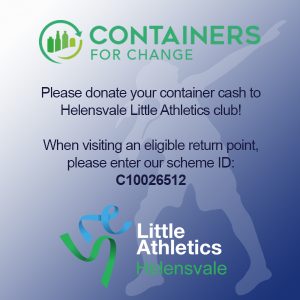 Made with ❤ Mick The WP Mentor